Be Our Friend
Keep up to Date 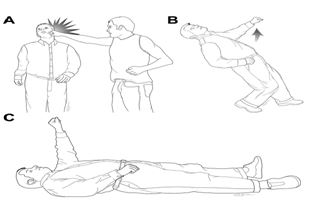 Research to develop tools to identify concussions is ongoing due to the importance of immediate diagnosis.  After a concussion, children and adults often have visual –related symptoms that we resolve in our vision therapy clinic.

One interesting observation can be the Fencing Response (pictured above). When observed, this response identifies moderate traumatic brain injury or concussion.  Upon impact, if direct or indirect forces of injury transmit to the brainstem, then an individual’s forearms are held flexed or extended (typically into the air) for a period lasting up to several seconds. One expression of the posture resembles a fencer’s en guarde stance, thereby earning the name Fencing Response.

The Fencing Response is used by health care professionals as an indicator of moderate injury forces applied to the brainstem and midbrain. This aids in concussion identification and classification for individuals of all ages and in all situations. Observing the Fencing Response should initiate immediate medical attention concussion protocols should be initiated. If injury forces were sufficient to elicit the fencing response, then the likelihood exists for injury to surrounding areas that could impact breathing, cardiovascular function, alertness, and other brainstem function

Eye movement testing (called the King-Devick Test) has also been identified as a way to diagnose concussions. The eye itself is not a significant part of concussions, but rather the coordination of the eyes. Depending on the level of the concussion, four basic visual systems can be affected: saccadic eye movement (small jumps of the eyes), smooth pursuit eye movement (tracking), accommodation (the system used to keep targets clear) and convergence (moving our eyes inward when we view targets up close).

Prevention of concussion is upmost importance with proper protective gear during sports. Fortunately, if there is a concussion, relieve of visual symptoms can be found in vision therapy. Awareness of treatment is important, since these symptoms often persist despite normal brain imaging and may not be detected in a routine eye exam.